As you may already know, Instagram has a few safety features that help you feel comfortable and safe when using the platform. For instance, you can report an account if you feel like it is threatening you or violating your rights, you can report a post if you feel like it is breaking Instagram’s rules, or you can block someone on Instagram if you don’t want them to be able to see your posts or contact you on the platform. But what can you do if you’ve blocked someone on Instagram by accident? Don’t worry, the situation is easily fixable and you can unblock someone on Instagram in seconds using our simple step-by-step guide. Keep in mind, however, that if you unblock someone after blocking them on Instagram, the person will automatically be removed from the list of your followers and they will need to start following you again manually.

To unblock a person on Instagram, first, open the Instagram app on your phone and log into your account. Tap the profile icon that looks like a silhouette of a person in the lower right corner of the screen. Next, tap the three-line icon to go to Settings and tap Privacy to open the tab. Choose Blocked Users from the menu that appears next to view the entire list of everyone you’ve blocked on Instagram. Find the person you want to unblock and tap their name – this should take you to their profile page. There, you will see a blue button that says Unblock at the top of the profile. Simply tap the button and then tap the Follow button that appears if you want to follow that person again.

How to unblock someone who blocked me on Instagram?

If you want to unblock someone who has also blocked you on Instagram, things become a little more tricky, although it is still possible to do this. The problem is that when someone blocks you on Instagram, you can no longer see their profile entirely – not just the photos and videos that they post. So if you simply enter that person’s Instagram handle into the search bar, the results will turn up nothing. However, there are two other ways to find the account of someone who blocked you and unblock it:

One of the easiest ways to unblock someone who blocked you on Instagram is to follow the steps above to find the list of Blocked users through the Settings menu on Instagram. Next, find that person’s profile, tap on the name to visit it and hit Unblock. Keep in mind that you won’t be able to follow or communicate with that person until they unblock you in return.

The second way to unblock someone on Instagram is to open your direct messages and find the conversation thread with that user. Next, send any message to them. They won’t actually receive the message from you, but you will get the chance to tap on their profile image to visit the account and unblock them. 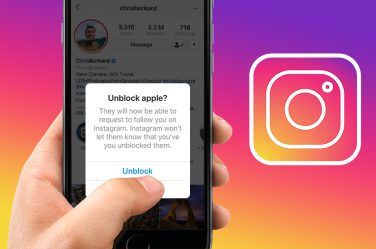